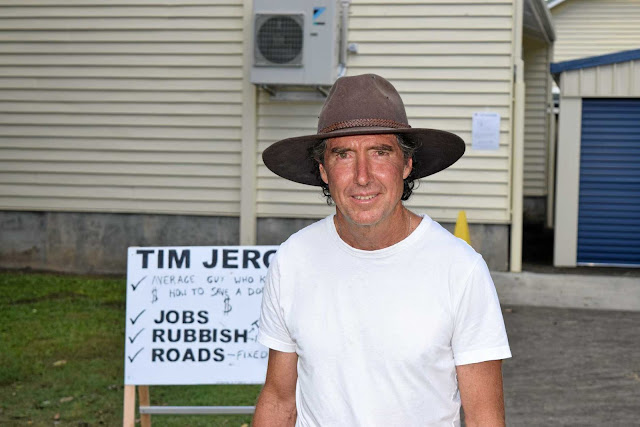 If elected as a mayor what would be more important - supporting small entrepreneurs or attracting big business to the Gympie region. TJ- I believe it is more important for council to support small businesses over big businesses. Small businesses are the backbone of any community. If elected as mayor, what three steps would you take to put our council on a firmer financial footing . TJ- Council needs to operate in the black. Council need to not spend over what we bring in from rates and charges. The balance is to attract small business to our region that will generate money into our economy. Offering things like no set up fees or no rates to attract new businesses is what I would be advocating for. Sometimes you have to give a bit to get a lot more in return. If you could change one thing in our zoning code, what would it be and why ? TJ- The zoning code question is too broad to give an answer. Every situation is different and needs to be judged on its own in
Post a Comment
Read more 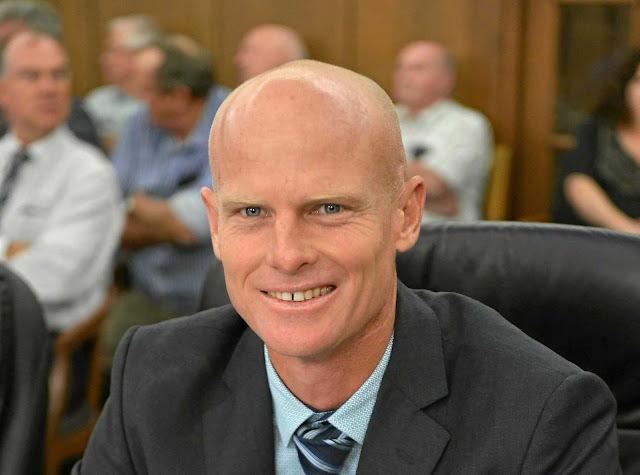 If elected as a mayor what would be more important - supporting small entrepreneurs or attracting big business to the Gympie region. GH - Both are important. Coming from a farm and having a small business at the moment sometimes I feel politicians focus too much on big business.   We have to evaluate where is the best bang for the buck. It is easy to throw lots of money at a large company but sometimes the best value for the region is to do the hard yards and work with small businesses to promote growth. Council fees need to be examined.  The council needs to look at options of reducing fees via discounts or deferring fee payments to allow a business to get on their feet. Every opportunity must be judged on its merits, but both are important to our growth. The most important way to attract the business of any size is to have a healthy proactive culture.  The planning review has shown inadequacies that haven’t really been dealt with. Under my leadership, I would foster a
Post a Comment
Read more 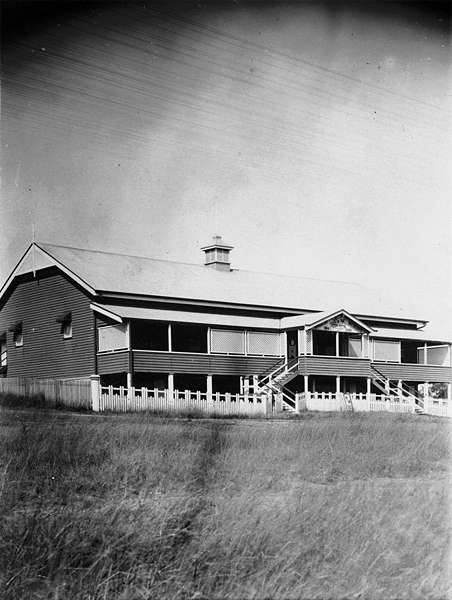 There is no exact date available for the opening of the Goomeri Hall of memory, but it appears to have been opened in the second half of 1926. The memorial Hall Building committee purchased a store from Nanango for removal and it was erected on its present site by A Kopp and W Toop. The Hal committee formed to raise funds for the new building, did not expect to have permanent status. On 31 st of March 1926, in the committee meeting, they decided to obtain a loan of 150 pounds from the local bank. The building was built quickly and leased to Mr. A Rich for his picture show. The hall was painted by Ray Winston who was also responsible for the leaf design surrounding the main stage. There used to be a flag pole on top of the hall but it was struck by lightning and never replaced. During the second world war, the basement of the hall becomes the storage place for 600 tons of emergency supply. At the time there was concern that Northern and Coastal areas would be bombed an
Post a Comment
Read more 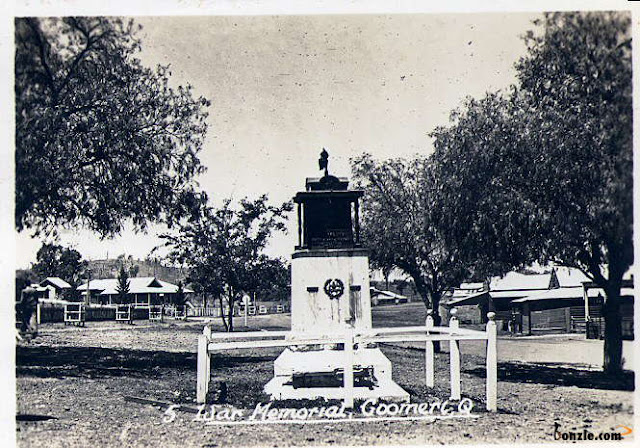 The first war memorial in Goomeri was erected on the triangle of land situated in Moore street and was much smaller than the present one. It was then known as the “soldier’s memorial reserve. There was also a move to erect the figure of a soldier on top of the memorial and to place the structure on a solid base The council proposed moving the Goomeri war memorial to a site fronting the hall of memory but the trustee of the hall objected. So in 1931 the council has decided to move the memorial and a new committee was formed to work in conjunction with the council. It took another eight years to built the new memorial the present one and the cost of the monument was 210 pounds. The memorial given Goomeri the name clock town because of the clock faces which grace the top of the monument. Instead of the numerals , one to twelve , the words “lest we forget” adorn the faces of the clocks. # history   # goomeri   # clocktown Reference - History of Kilkivan shire by Dulcie Log
Post a Comment
Read more 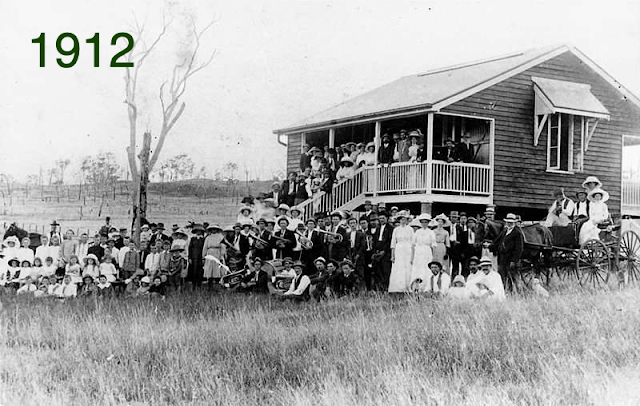 Following the Boonara Land sale in 1911 provisional had been made for a future school for the town. A provisional school was established and classes were held in the hall of Boonara hotel temporarily. A provisional school was later opened on 5th February 1912. On the first day of school 21 children were enrolled. Miss Robertson was the teacher in charge. A school was opened on 20th January 1913 , on the site of the present school. By then the attendance had increased so rapidly that an assistance was hired. By 1916 the attendance had outgrown the size of the school and a new school was built.Same year the school hired another assistant. After clearing the ground the school committee set out to make Goomeri School a model school with Piano classes, Tennis court, a well with a windmill and water system. There was a garden, saddle racks and drinking troughs for the horses. Experiment in plant growing were carried out in co-operation with the QLD Agricultural college and th
Post a Comment
Read more

Marching Girls of Cherbourg.  First Picture was taken in 1958 and the next three in 1962. To read the full story please click the link below. Photograph and story courtesy -  https://tinyurl.com/y2halgbo 'Just an adventure' Aunty Lesley Williams said it "was very significant". "But we didn't realise it at the time, for us it was just an adventure," she said. Aunty Lesley was one of the thousands of teenage girls across the country who had been swept up in the sporting phenomenon of marching and her team was off to perform in Melbourne at a national competition. Significantly, they were the only Indigenous group in the country in an era when their lives were controlled under the Aboriginals Protection and Restriction of the Sale of Opium Act 1897. Still largely unknown about the Marching girls of Cherbourg "This was hugely significant, it literally opened up a new world for them — they were out there taking it to Australia and doing them
Post a Comment
Read more 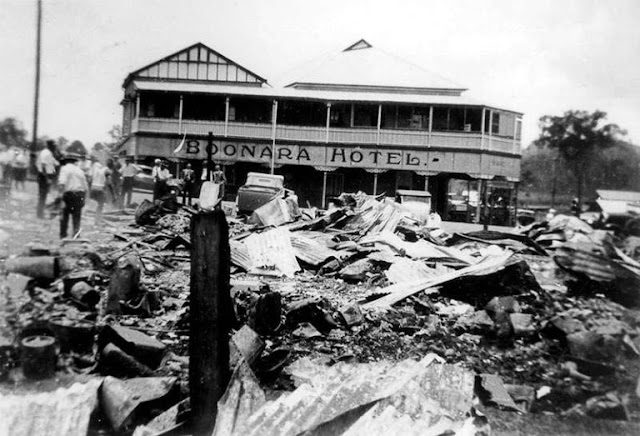 The Boonara Hotel, which was located opposite the Grand Hotel was totally destroyed by fire eight years after the Grand Hotel fire in 1947. No one was hurt or killed in that blaze. That pub was never rebuilt. It can be seen in one of the photos posted here in the background of the smouldering Grand Hotel. Related News Clip from The Telegraph newspaper (Pic no 3) GOOMERI HOTEL IN DESTRUCTIVE FIRE GOOMERI: The Boonara Hotel, a two-story wooden building containing about 28 rooms, and situated on the corner of Boonara and Moore Streets, was destroyed by fire early this morning. The building has been unoccupied for some time, and tire outbreak was first noticed about 1.30 a.m. When people who saw it rushed to the spot the flames had too great a hold for them to attempt to save the building. Volunteers formed a bucket brigade and played water on the front of another hotel across the street to keep it from catching fire. Notwithstanding this, a number of windows in tile
Post a Comment
Read more
More posts